The Gospel of Mary and Christian Origins

We have a big weekend at First Pres., Elizabethton. The Carl Jung Seminar has 85 people signed up so far with more expected at the door. You can still register and childcare will be provided. 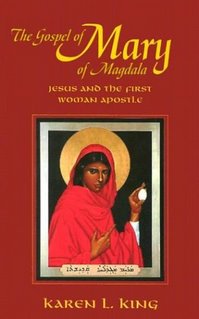 This Sunday I finish my third series in our adult class on Mary Magdalene, "There's Something About Mary." You can view the powerpoints of the first two classes on the church's web page.

This week we look at the Gospel of Mary. Karen King of Harvard has written an excellent book on this gospel, The Gospel of Mary of Magdala: Jesus and the First Woman Apostle.

The Harvard Gazette published an article about her work, Student of Early Christianities. Before she published her book, she wrote a preview about it and the importance of Mary for understanding Christian origins, Letting Mary Magdalene Speak.

This is the model I learned in seminary. The master story looks at the earliest writings, gospels, letters of Paul, and other writings (both canonical and non-canonical) through the lens of the New Testament canon and the Nicene Creed. King points out that this is inaccurate history. The canon and the creed are end products of early Christian origins. In the beginning was diversity. Check out all the writings that didn't make it into the canon.

The writings we have in the canon represent the views of the writers. They are incredibly diverse within themselves (compare Paul and James, for instance). There was no rule of faith, no canon, no scripture. We don't know whose Paul's opponents really were or the opponents of the gospel writers or of the early church fathers except from what we could glean from them. Until now. Now we know some of these early writings in their own words. As King points out, we can see that categories such as gnostic or Jewish Christian were labels by the orthodox to distinguish heretics from the "true believers."

There was no gnostic belief system. There was no gnostic creed. There were different communities attempting to understand and communicate the historical Jesus in their various settings. For example, the Gospel of Mary was written in Egypt, far removed from Judaism and written in the philosophical setting of Plato and the Stoics. The writer of the Gospel of Mary would have thought of herself as Christian. In fact, there are great similarities between GMary and Paul as well as important differences. We won't be able to read and hear them accurately if we read their works through the lens of the Nicene Creed and canon.

What does this mean? For accurate history, and for the future of Christianity,