Showing him the way

It is time for Americans to take action. This Saturday, thousands of Americans will go to Washington D.C. to make a visible demonstration for peace. United for Peace and Justice provides information, news, and a schedule of events. They also have sample letters and e-mails that can be sent to senators and congresspeople. 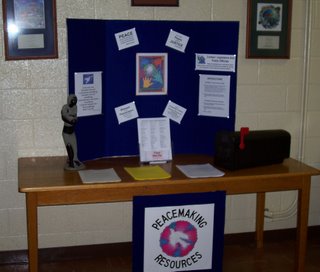 At First Presbyterian Church of Elizabethton, our Peacemaking Committee has set up a table in which individuals can sign letters (or write their own) and the committee will mail them to our two senators, Bob Corker and Lamar Alexander, and our representative, David Davis.

I watched the president's state of the union address last night and the response by Virginia Senator, Jim Webb. Senator Webb said what needed to be said with clarity and conviction. You can read a transcript of Senator Webb's address here.

Senator Webb served as a Marine in Vietnam. This portion of his speech is worth repeating:

Like so many other Americans, today and throughout our history, we serve and have served, not for political reasons, but because we love our country. On the political issues, those matters of war and peace, and in some cases of life and death, we trusted the judgment of our national leaders. We hoped that they would be right, that they would measure with accuracy the value of our lives against the enormity of the national interest that might call upon us to go into harm's way.

We owed them our loyalty, as Americans, and we gave it. But they owed us ­ sound judgment, clear thinking, concern for our welfare, a guarantee that the threat to our country was equal to the price we might be called upon to pay in defending it.

The president took us into this war recklessly. He disregarded warnings from the national security adviser during the first Gulf War, the chief of staff of the army, two former commanding generals of the Central Command, whose jurisdiction includes Iraq, the director of operations on the Joint Chiefs of Staff, and many, many others with great integrity and long experience in national security affairs. We are now, as a nation, held hostage to the predictable ­and predicted ­disarray that has followed.

The war's costs to our nation have been staggering. Financially. The damage to our reputation around the world. The lost opportunities to defeat the forces of international terrorism. And especially the precious blood of our citizens who have stepped forward to serve. 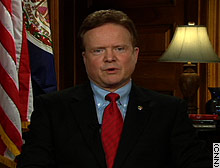 The majority of the nation no longer supports the way this war is being fought; nor does the majority of our military. We need a new direction. Not one step back from the war against international terrorism. Not a precipitous withdrawal that ignores the possibility of further chaos. But an immediate shift toward strong regionally based diplomacy, a policy that takes our soldiers off the streets of Iraq's cities, and a formula that will in short order allow our combat forces to leave Iraq....

As I look at Iraq, I recall the words of former general and soon-to-be President Dwight Eisenhower during the dark days of the Korean War, which had fallen into a bloody stalemate. "When comes the end?" asked the general who had commanded our forces in Europe during World War II. And as soon as he became president, he brought the Korean War to an end.

These presidents took the right kind of action, for the benefit of the American people and for the health of our relations around the world. Tonight we are calling on this president to take similar action, in both areas. If he does, we will join him. If he does not, we will be showing him the way.