Welcome to Conversations with Bob! It is Bob's turn! You can also read his story on his blog.

I talked about my childhood. Now I’m going to talk about my ancestors.

Mostly I think of myself as Scottish, but like most Americans I’m a mutt. My Dad’s paternal grandfather came to the from . Ours was one of those families offered land in in the early 1600’s if they would go and keep an eye on the Irish Catholics. The English wanted to control the Irish and used Scots Presbyterians to do it. So the Troubles in began. 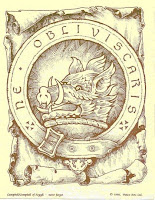 Anyway, my great-grandfather, John Campbell came to the in 1876 as an Irish whisky salesman. His future wife, (and his first cousin), had come earlier through with her family and settled in . Her brother was a Presbyterian pastor. Great grandfather John was an elder at the Presbyterian Church in .

As for the rest of the family, we are a mess. We have ancestors from England on both sides of the family, including people who came on the Mayflower, fought in the Revolution, built ships in New England that were probably used as slave ships, all of whom eventually left New England for other parts. They were, from what we can tell, devout.

My mother’s paternal ancestors moved from , started a tiny town in North Central PA and built a Baptist church there. I used to be related to half the town. My maternal grandfather met a nice woman at extraction, whose family had been around since before the Revolution, and married her. She died when my Mom was in high school. My other three grandparents lived into the sixties and in one case, the seventies.

I had these two maiden great aunts, my mother’s father’s sisters, who came to visit us regularly, and particularly when Mom had her babies. One of my great aunts, who saved everything, had a note from me, written to my mother when she was in the hospital after the birth of my youngest brother that said I was going to be a minister. I have no memory of that note.

While my Mom’s church and family was fairly conservative, (there was no alcohol served at my parent’s reception, to the horror of my Dad’s mom), the church we attended was kind of middle of the road. The pastor I really got to know had a PhD and was an expert in Bonhoeffer. During the Vietnam War his wife would go down to the demonstrations against the war at city hall, to the shock and dismay of the congregation.

So I grew up Presbyterian. I had no idea what that meant as a child. No one ever talked about predestination or any of the other great Presbyterian doctrines. It was just church, and we went.

I started Junior High in 1963. The Beatles were popular and I hated their music then. “I Wanna Hold Your Hand?” What dreck! I was into show tunes then. Still am. I developed a love for Rock and Soul a year later. While still going to church I wasn’t much of a Christian. I was much more interested in pretty girls, although I had no idea how to talk with them, and my daily life. And things didn’t change much in high school until the summer after my sophomore year. Then I went to church camp. And things began to change.