(It is Conversations with Bob! Bob and I are doing what The Theological Task Force has requested. Keep lines of dialogue open and speak openly of agreements and differences in a respectful way! It is Bob's turn!) 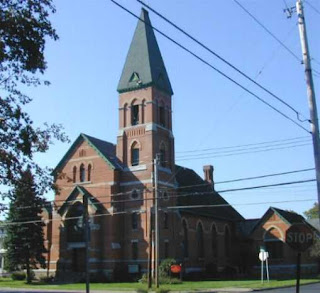 We moved to in 1989 and left in 2001. I was a member of Utica Presbytery before John arrived and after he left. In some ways feels more like home, except when we lived near my parents, than any other place we’ve lived and I’ve served as a pastor. When we moved to our son was in 3rd grade and my daughter in 1st. Both our children graduated from . Both still look on as home. For the first time in our lives we bought a house, which frankly isn’t all that it’s cracked up to be.

This will be a bit of a struggle about how much to reveal about my relationship with the church in . I’m going to say the good things first.

For the first time in my life I was a head of staff. 1st had about 400 members on the roll when I arrived. I had taken courses in management and enjoyed being head of staff. We had a secretary, two sextons, a Christian Educator, and sometimes a Music Director and sometimes an Organist and a Choir Director. I tried to be a collegial head of staff. Unfortunately a couple of times I had to fire employees. I hated that, but it was part of the job. Joyce Irwin, our Music Director and later also the Christian Educator was the best organist, choir director I have ever had the pleasure to work with. And she developed innovative programs in C.E.

I continued teaching Kerygma classes, including Beginnings, a class on Genesis, Discovering the Bible, an introductory Bible class, Interpretation, a deeper class on how to interpret the Bible, and Hallelujah, a class on Handel’s Messiah. I urge any pastor to consider the Kerygma classes. I also wrote my own class on Mark a class built on the Kerygma model, classes on The Book of Confessions using Jack Rogers’ wonderful book, Presbyterian Creeds: A Guide to the Book of Confessions, and a series of small group Bible studies. All in all I had a blast teaching. And, as most teachers do, I think I learned much more than the students.

At first I had a great deal of support for change, but I didn’t rush into things. My two installed predecessors had lasted 2 ½ years and 10 month respectively and both had resigned but really had been forced out. So I took the process of change very, very slowly. We did experiment with different types of worship on Pentecost each year and incorporated some of the changes into regular worship.

In the long run we started using the Logos Program for youth, a midweek program that included recreation, education, worship education, (mainly a musical experience like choirs), and dinner. It was fun. The high school youth started a rock band that played in worship occasionally and was well accepted by the congregation. This unfortunately led to conflict with the Women’s Association.

And yes I did weddings, funerals and baptisms.

One of the best things about was the Council of Churches. Most of the congregations in town participated including the Pentecostals and the Roman Catholics. We had some wonderful programs on differences and similarities of worship and even a program on baptism. I did joint weddings and baptisms mostly with the Roman Catholics. We started a voluntary hospital chaplaincy program which I headed for around 5-7 years. We even worked out a program to help people who needed assistance by writing vouchers to a local gas station/convenience store. The Methodists kept the records.

One of the big controversies in was about the Oneida Indian nation. They bought some land, negotiated with the governor and opened a casino. Then they sued the county government, claiming a lot of land as part of their reservation, including the whole city of . For some reason this didn’t go over too well with the home owners whose houses were on the land the tribe claimed. We pastors worked for peace and reconciliation, particularly when violence was threatened. This got some of us, including me, in trouble with some of our congregational members who didn’t want any reconciliation.

As John pointed out when we first started this dialogue I was an Evangelical in what, from my point of view, was a progressive presbytery. The good news was that, for the most part I was respected and heard. The presbytery rarely voted my way on important issues but that didn’t stop me from being respected and accepted. And I had one very close friend who was my spiritual advisor and I his. We probably knew more about each other than our wives did.

BUT! There was a curious dynamic of conflict in the congregation. I expected this and tried to encourage new styles of dealing with conflict, for the most part unsuccessfully. We got new hymnals but kept the old ones and I tried to use hymns from both, but some people didn’t accept the new hymnal at all. They wouldn’t sing the hymns if they were from the new hymnal. We tried a new method of serving the Lord’s Supper, coming forward to receive the sacrament. Some loved the new method. Some wanted only the old method, being served in the pews. We had a successful negotiation about this, having a congregational wide survey which helped people to not only state their emotional/spiritual reasons for wanting to receive communion in a particular way but also to make theological statements on the issue.

We also had a successfully resolved conflict about change in the chapel. We formed a task force of people who disagreed about how to use and set up the chapel and they came up with an elegant solution that was different than any suggested by any of the sides earlier and satisfied all sides. Unfortunately all problems were not so easily solved.

I started a DMin program at Pittsburgh Seminary in 1997. I loved it. I had spent too much time on administration and not enough on theology. The program gave me the balance.

In the spring of 2000 things came to a head. I had started training small group leaders to encourage spiritual renewal as part of my DMin project and talked with the Session about spiritual renewal. In the meantime I made the mistake of paying attention to the new members of the congregation who wanted change and not paying attention to the needs of older members. Finally, after we called in people from the Committee on Ministry the Session asked for my resignation. But with a twist.

My daughter had another year in high school. The Session allowed me a year to find a new call so my daughter could finish high school in . I had to drop my DMin project and program. The conflict and solution was hidden from the congregation. We decided to stay so my daughter could graduate. It was a great decision for her. It was a terrible decision for me. I spent a year working in a congregation where the Session had made it clear that I was no longer wanted and it hurt terribly. Fortunately I still had lunch with my friend and got a lot of support from the Interim Presbytery Exec. It was something but it wasn’t enough.

After several interviews all over the country, I ultimately accepted a call to a congregation in . I resigned as pastor of 1st, a decision I’m still not sure was the right one. Sometimes I think the conflict should have been brought to the congregation. And unfortunately I carried with me a lot of anger and pain from .

Suffice it to say that it was a bad parting. We sold our house and we moved to a church in .