Hey! Time for Conversations with Bob! Grab a Grape Nehi and belly up to the computer screen! It is Bob's Turn! 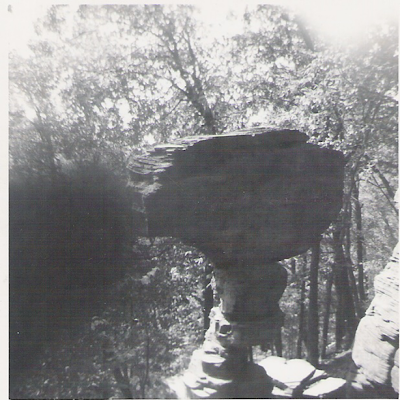 Dad had grown up right near where we lived in North Central Jersey. . His parents moved to about an hour away in the mountains and we went to see them once a month on Sundays. Mom grew up in a tiny town in central PA. We spent summer vacation there, playing in the creek and visiting the relatives in the graveyard and going to Ticklish Rock. (I took this picture of it and my thumb in 1963)

We grew up going to church. The Presbyterian Church, of course. Where else would someone named go? I don’t remember ever asking to stay home. It just wasn’t done. We went to Sunday School. I remember the big, white, style sanctuary and sitting in the balcony on Christmas Eve.

Prayer was a part of every meal and part of bed time.

It’s strange thinking back to the way things were. We didn’t have a lot, certainly not compared to today. There was plenty of food and we had enough clothes. The house was a bit small, three bedrooms with five kids and two adults but we moved to a bigger house when I was in Junior High. We had one car for years. My parents didn’t allow toy weapons so we pretended sticks were guns and threatened the engineer of the train as it went though town. My brother and I could just tell Mom we were going for a bike ride, make lunches and ride all day. I read a lot. The big thing to do in town for children was swimming at the YMCA. We went away to camp and I was in Boy Scouts.

And yes, I went to school. Curiously we went to school through the 1950’s and 60’s with little prejudice against those of other races, except the Italians. There were lots of Italians in town and very few African Americans so Italian Americans were considered a threat. Catholics too. I never could figure out why they got out of school early one day every week and why, every February they walked around with dirty foreheads one day. School was no big deal until I got to Junior High and learned that the upper class in town lived on the Hill and I was middle class.

Mom grew up Baptist so none of us got baptized until we joined the church. I remember Communicant’s Class. Being the obnoxious inquisitive kid that I was when the pastor asked if Jesus ever sinned I asked if he hadn’t sinned in the , asking the Father to let him out of being crucified. Of course the pastor told the parents about this one question from one of the students and my Mom, smart woman that she is, figured out it was me.

It was very strange. I got baptized with a couple other kids in a private service. It didn’t happen in worship.

The biggest thing I remember from church was THE GREAT DEBATE over whether the Associate Pastor would become the pastor. There were no rules about that back then. He became the pastor and was later a friend and colleague of mine.

God was just there. No one asked about children taking the Lord’s Supper. I prayed childhood prayers, some serious and some stupid and went to church.