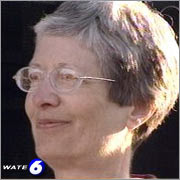 OAK RIDGE (AP) -- A Roman Catholic nun will serve 20 days in jail for obstructing a roadway during a protest at the Oak Ridge nuclear weapon facility.

Elizabeth Ann Lentsch was one of five protesters arrested Saturday during a demonstration to mark the 62nd anniversary of the atomic bombing of Hiroshima at the Y-12 facility that helped build the bomb. Read More