Can't beat it for candor! It's Conversations with Bob! Bob's turn! 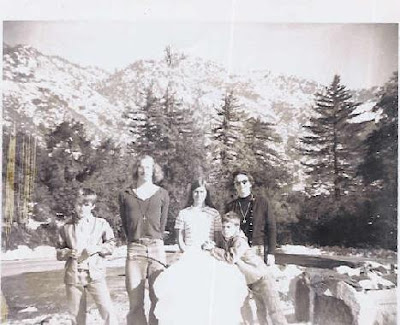 This is a picture of me and my family taken in the winter of 1970-71, after 1 quarter at college. I tried to find the picture of me with longer hair and a beard but can’t. That’s me with the long hair.

I went off to college one confused student. On the one hand I still believed God wanted me to be a pastor. On the other hand I was busy being a hippy. Looking back I think I was partly running away from the idea of being a pastor. So I turned to sex, drugs and rock and roll. On the other hand I became a religion major.

I learned very early in my freshman year that drinking a whole lot was a bad idea. It doesn’t feel too bad when you are drunk, even throwing up. The hangover the next day is a killer.

And I fell in love. I mean really deeply head over heels going down for the third time in love. I still had retained the training of my youth: if you have sex you get married. It was great and I was happy.

I went to class too. I started taking religion classes. I read Augustine, Kierkegaard and Tillich. I started to take Bible classes. It was my first experience with the idea that the Bible didn’t drop down out of heaven and that some scholars believed that parts of the Bible weren’t true or at least didn’t happen exactly the way the text said it happened.

After going home for the summer to I came back to the news that my girlfriend had a new boyfriend at home and was breaking up with me. I was devastated. I had my first extreme anxiety reaction and my first major depression. I spent most of the winter quarter playing cards and not going to class. Curiously I passed Sociology with a C without going to class or reading the book. I did read all my Religion texts. I had really bad experiences with drugs. I quit using and I quit drinking too.

I carried on my anti-war activities. I did draft counseling both at school and back home in . We sat on the front steps of the draft board and offered advice on what the draft law really said. Neither the draft board nor the FBI were amused.

Sometime towards the end of my sophomore year I wandered into a meeting of the campus Christian fellowship. Something happened to me that night. I found out that two guys from my freshman dorm hall had been praying for me for over a year. And as I prayed at that meeting I felt the presence of God. Somehow it felt like these people that I barely knew were more my friends than my druggy friends. I felt a connection to God. But it didn’t change my theology.

I went home for the summer believing that Bultmann was right, that there had been no literal resurrection, that the disciples had had a resurrection experience. I tried to teach it to the youth group at my home church. It didn’t go over too well.

I went back to college for my junior year partly changed. I stopped running away from God and accepted that I was going to be a pastor. And I began to question the historical Jesus movement. Bultmann’s God didn’t help me at all. I needed a God who could actually change things in my life and in my heart. So I began to ask questions in religion classes. I was a pest.

Sometime in my junior or senior years I met a crazy Dutch Calvinist named Pete Steen. He introduced me to a whole different way about thinking of Jesus as Lord. He taught me that Jesus was to be Lord of all of life and I began to learn ways to think about that. When I talk about ethical issues it comes out of that tradition. Pete also taught me to question the philosophical assumptions of everyone. I found out that Reimarus was looking for a Jesus without miracles and that Bultmann started off with Existentialism and ended up with Heidegger. It wasn’t that I was convinced that the Bible was dictated by God. Rather I began to question the assumptions of the scholars. I lost faith in the idea that one could find a historical Jesus behind the Bible. And I began to trust the Bible more, both as a historical document and as a document that had authority.

I spent a year working for the university as a housing director. I spent some of my time teaching students about the presuppositions of the scholars they read in religion classes. The religion professors were not happy with me. After a year working for the university, (during which I met my wife), I headed off to Fuller Seminary, now a Calvinist Evangelical, still with long hair.