Ike and the Gas Hogs

People are going nuts near my mountain. Gas stations are out of gas. I finally found a station just a few minutes ago just before it closed (Appco across from Wal-Mart in Johnson City). It was pretty cheap considering prices today, $3.95. The cashier said that earlier today there were huge lines. One guy went nuts and pulled out a gun. Cops came. Take a breath, folks. 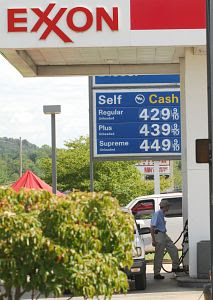 Long lines could be seen at gas stations all across the Tri-Cities Region today. Gas prices have risen over 30 cents, and a few stations even had prices over $5.00 per gallon. Many stations are out of regular and now only have premium.

The reason for all this chaos-- Hurricane Ike. The Associated Press reports, at least eight Texas refineries are shutting down as Ike prepares to make landfall. The region provides about one-fifth of the nation’s petroleum refining capacity. (Read More)


Here is the latest from the Johnson City Press.

Long lines of traffic at many area gas stations caused traffic problems as customers waited to get fuel during the price increase Friday. This line stretched around the block at Wal-Mart in Elizabethton. (Lee Talbert / Johnson City Press)

Steb Hipple, an economist with East Tennessee State University’s Bureau of Business and Economic Research, said Friday’s activities reminded him of the days before the Federal Deposit Insurance Corp., when people would make runs on banks based on fear and rumors.

“There was an old joke that consumers can’t be trusted with a consumer economy, and this is an example of that,” Hipple said.

A Houston native, Hipple said he expects the interruption in refinery production to be minor from what he’s seen of Hurricane Ike’s severity. He said actions like those consumers took Friday often have negative consequences.

“It’s panic buying,” he said. “It’s the kind of behavior that will guarantee the feared result (shortages or higher prices) will occur.” (Read More)

Meanwhile, Ike is a big deal. It is happening now. 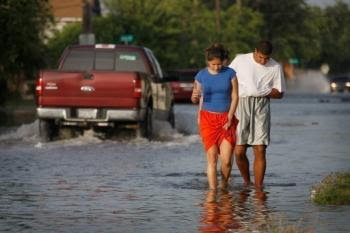 Residents walk down a flooded street in Galveston, Texas, AFP
Friends in Texas, you are in our prayers.

We can do more than pray. Now would be a good time to give to organizations that will be helping following the disaster, such as the Presbyterian Disaster Assistance.