Our choir director at First Pres., Debbie Gouge, was featured in the Johnson City Press today. She will be lighting the community Christmas tree. She is one amazing person. She is not only a survivor of breast cancer, but a thriver with a marvelous sense of humor! Check the story:

ELIZABETHTON — Two remarkable survivors will come together Tuesday in the traditional start of the Christmas season in Carter County.

The survivors are a tree and a woman. Both are an inspiration to their community.

The tree is a 78-foot-tall Fraser fir, the tallest Fraser in the state and second tallest in the world. It reached this size despite being transplanted in a location much hotter and drier than its normal range. This year marks the 20th year the tree has been the Community Christmas Tree, displaying thousands of Christmas lights that are visible throughout much of downtown.

The woman is Debbie Gouge, who has directed the Elizabethton High School Choral Group at nearly all of the annual lightings of the tree. This year she has provided even more inspiration to the community by displaying a courageous and determined will to overcome breast cancer. In honor of her years of service and her more recent battle, Gouge has been selected for the honor of throwing the switch that turns on the lights to the great Christmas tree. 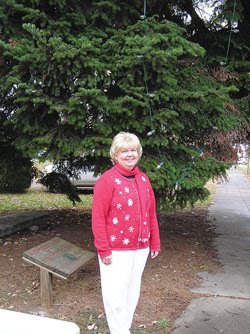 “I was totally surprised when I was told I had been selected,” Gouge said. “I have been to all of the lightings except for the one when the wind chill was down to about 4 degrees and they canceled the choir and other events.”

The event has grown over the past 20 years, but so has Gouge’s choir. When the choir started performing at the tree, Gouge was the new director of a struggling group. She was the ninth director in a 10-year period and there were only 40 members. After directing the choral group for 20 years, it is now 130 strong.

Last spring, Gouge did not know if she would be back for the 20th tree lighting. The week that school was getting out, she learned she had breast cancer and later learned she had one of the most aggressive forms of the disease.

The diagnosis came on the last day the seniors were in school last year. She kept it secret because she didn’t want to spoil Senior Day.

Since then, her struggle has become a very, very public one.

“I know everyone from Timbuktu and back has been praying for me,” Gouge said. “I can’t begin to tell you the support I have received from all over town.”

The support has been especially strong among the student body and it was especially evident during Homecoming.

The pink ribbons of breast cancer awareness were just as prominent during homecoming as the school colors of orange and black. Before most football games, students like to wear team jerseys, but for homecoming, the most popular attire was a T-shirt promoting breast cancer awareness. On the back of the shirts was a message to Gouge that has become a theme: “We got your back.”

Pink was also prominent in the Homecoming parade. There was even a breast cancer awareness float in the parade. Along with the yard lines and school insignia, a pink ribbon was painted on the green grass of the football field. The crowning complement was perhaps given by the macho football players, who had pink ribbon stickers affixed to the back of their helmets.

Gouge said all of the support has helped her through the difficult surgeries and the year-long ordeal of chemotherapy. Although she has had to miss a few days of class, she has managed to continue her teaching and directing this year, and continues to inspire her students to overcome obstacles.

The Community Christmas Tree has also inspired others not only by its beauty and size, but by its struggle to thrive in a difficult climate.

The tree grows right outside the office of agricultural extension agent Keith Hart. The office is in the house built by Maj. Henderson Folsom, the highest ranking confederate soldier in the Civil War.

Hart said sometime in the 1860s Folsom took his family to the top of Roan Mountain for a picnic. While they were up there, the family dug up two Fraser fir saplings and brought them back to Elizabethton, where they were planted on each side of the front entrance to their home.

Hart said Frasers normally grow around 5,000 feet in elevation or higher. They don’t do well in lower elevations. He said they usually grow for about 20 years and then succumb to the stress of the heat and drier conditions.

That is exactly what happened to one of the trees the Folsoms brought from the Roan. But the remaining tree continued to endure and grow. Hart said foresters call such a tree an “elite tree.”

Hart said the tree did not only survive more than a century of hotter and drier summers, it also survived some major floods of the nearby Doe and Watauga rivers.

“Usually when Fraser fir roots get flooded the tree dies,” Hart said. “It has also survived 60-mph winds that have really shook this old house.”

The recent high temperatures and drought are some of the most extreme the old tree has ever endured and Hart said the tree shows the effects of its struggle. There are brown spots throughout the tree that he called heat cankers.

Hart does not know how much longer this elite tree will survive, but he is sure that the tree should be celebrated while it is still here.

“We don’t need to take it for granted. We need to utilize it while it is still here,” Hart said.

This year’s lighting will certainly utilize the tree to bring the community together on Tuesday to officially start the Christmas season in Carter County. The festivities will begin around 5 p.m., with Gouge lighting the tree at 6 p.m.

Entertainment will not only be provided by Gouge and the Elizabethton High School Choral Group, but also by Loretta Bowers Newton, Jeremiah Nave, Loren Harris, the Overmountain Men, the Happy Valley Trumpeters and the 776th Maintenance Company Honor Guard.