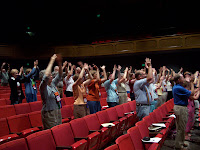 
Anuhurata Mittal of The Oakland Institute spoke Wednesday morning about the food crisis in the world.

Seventy-seven percent of the people in India live on less than 50 cents per day. Like many countries around the world, India faces an increasing disparity between the wealthy and the poor. 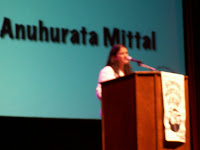 "What is the cause?" she asked us.

She told us that the cause of the world food crisis is not by accident or is it because we lack the technological capacity to secure food.

There are structural causes that have been in place for decades. Consider: India grows flowers for export to the United States. Flowers--not food for its own people. Why? Who benefits? Why is Coca Cola producing soft drinks in India?

The real cause is injustice. This includes the lack of living wage jobs and transnational corporations that have taken over the food system. 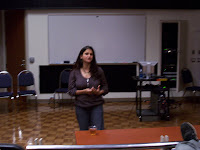 In a conversation she held the next day, I asked her what is the most important thing I can take back to my congregation. She said that we need to open our eyes to the true causes of hunger.


Ms. Mittal said that nations need food sovereignty and that there will be no peace when there is hunger. The true causes of hunger are human-made decisions that can be changed.

She was one of three speakers to recommend the same book:

The Shock Doctrine: The Rise of Disaster Capitalism by Naomi Klein.

I purchased the book at the campus bookstore and have finished about a third of it. It is an eye-opener. Check out an interview with Klein on Democracy Now!

Here is a summary:

In THE SHOCK DOCTRINE, Naomi Klein explodes the myth that the global free market triumphed democratically. Exposing the thinking, the money trail and the puppet strings behind the world-changing crises and wars of the last four decades, The Shock Doctrine is the gripping story of how America’s “free market” policies have come to dominate the world-- through the exploitation of disaster-shocked people and countries.

Mittal also recommended Late Victorian Holocausts: El Nino Families and the Making of the Third World by Mike Davis. I haven't checked that book out yet, but I will. Here is a summary:

Late Victorian Holocausts focuses on three zones of drought and subsequent famine: India, Northern China; and Northeastern Brazil. All were affected by the same global climatic factors that caused massive crop failures, and all experienced brutal famines that decimated local populations. But the effects of drought were magnified in each case because of singularly destructive policies promulgated by different ruling elites.

Davis argues that the seeds of underdevelopment in what later became known as the Third World were sown in this era of High Imperialism, as the price for capitalist modernization was paid in the currency of millions of peasants' lives.

I heard themes like this again and again from the speakers and from those who brought back stories from our partner churches in South America, Asia, and Africa. But not only there, also in America. We are giving our sovereignty away to corporations and to those who benefit by them. People are suffering for it.

But another theme of this conference was that this can change. Around the world people are opening their eyes and are resisting. I heard those kinds of stories as well, including people in India who shut down a Coca-Cola plant that had been using so much drinking water that there was little left for the people. The people stood up, organized, and made a difference. Check Sarah's blog for the story.