The subtitle for the Presbyterian Peacemaking Conference for 2008 was Sowing Mustard Seeds: Working for God’s Justice — Confronting Poverty. The global food crisis was a key concern. The General Assembly just a few weeks ago passed this resolution which includes:

4. Produce relevant resources, using all available communications means, to raise the awareness of Presbyterians about the current food crisis, including the dangers for the U.S. government, the European Union, and other international entities who want to use the current food crisis as an opportunity to offer more direct food aid exports and genetically modified (GMO) seeds to affected countries, instead of offering economic and financial assistance to enable them to increase the production and marketing of their own traditional food commodities.

I will do try to do my part by blogging what I am learning. You might also check the Food and Faith blog which links to the PC (U.S.A.) Just Trade page. You will find this:

Most food in the world is grown, collected and harvested by more than a billion small-scale farmers, pastoralists and artisanal fisherfolk. This food is mainly sold, processed, resold and consumed locally, thereby providing the foundation of peoples' nutrition, incomes and economies across the world.

At a time when halving world poverty and eradicating hunger are at the forefront of the international development agenda, reinforcing the diversity and vibrancy of local food systems should also be at the forefront of the international policy agenda. Yet, the rules that govern food and agriculture at all levels - local, national and international - are designed a priori to facilitate not local, but international trade. This reduces diversity and concentrates the wealth of the world's food economies in the hands of ever fewer multinational corporations, while the majority of the world's small-scale food producers, processors, local traders and consumers including, crucially, the poor and malnourished, are marginalized. (Read More)

I heard a lot about "free trade" at this conference.

Roberto Jordan was one of the keynote speakers. He is the president of the Reformed Church in Argentina, a member of the executive committee of the World Alliance of Reformed Churches, and one of the drafters of the Accra Confession.

This confession contains powerful language about economic inequality and our call to do justice. For instance, here is article #19:

Therefore, we reject the current world economic order imposed by global neoliberal capitalism and any other economic system, including absolute planned economies, which defy God’s covenant by excluding the poor, the vulnerable and the whole of creation from the fullness of life. We reject any claim of economic, political and military empire which subverts God’s sovereignty over life and acts contrary to God’s just rule.

In his speech to the conference, he reminded us of 9/11. Not 9/11/2001 but 9/11/1973 when military general Augusto Pinochet of Chile overthrew Allende's government and instituted a military dictatorship that was aligned with the neoliberal economic views of University of Chicago economist Milton Friedman.

The CIA backed the coup, trained military leaders at the School of Americas, and through Plan Condor destroyed resistance to those who opposed Pinochet's military and economic plans.

Rev. Jordan told the conference to remember this: 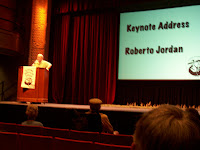 "It was not a military coup that installed an economic system. The system needed the military because it would not have been accepted without the military. It needed people to keep quiet and allowed no criticism."


Rev. Jordan also recommended Naomi Klein's Shock Doctrine: The Rise of Disaster Capitalism. She provides detailed scholarship to that history in Chile and makes the connection between neoliberal economic policies and the military coercion and in some cases torture to enforce these policies in Latin America and around the world.

Jordan said that free trade agreements "are legion" in Latin America. They are "neither free, nor trade, nor agreement." He added, "Neo-liberal economics is the greatest threat to democracy."

He added as a joke that Latin Americans should be allowed the vote in the upcoming U.S. presidential election. The point being that who we elect, and the actions our government takes, has huge effects on the lives of our southern neighbors.

A panel followed Jordan's address. On the panel was Sarah Pray, the executive director of Publish What You Pay. This is one way in which we can make corporations and governments accountable for the resources extracted from resource-rich developing countries. The vast majority of the people in these resource-rich countries do not benefit from these resources. From the website:

The Publish What You Pay campaign aims to help citizens of resource-rich developing countries hold their governments accountable for the management of revenues from the oil, gas and mining industries. Natural resource revenues are an important source of income for governments of over 50 developing countries, including Angola, Indonesia, Kazakhstan, Nigeria and Venezuela. When properly managed these revenues should serve as a basis for poverty reduction, economic growth and development rather than exacerbating corruption, conflict and social divisiveness.

The Publish What You Pay coalition of over 300 NGOs worldwide calls for the mandatory disclosure of the payments made by oil, gas and mining companies to all governments for the extraction of natural resources. The coalition also calls on resource-rich developing country governments to publish full details on revenues. This is a necessary first step towards a more accountable system for the management of natural resource revenues.

Heavy stuff. Lots of links. I hope you will find time to check some of them out.

Here are some happy pics: 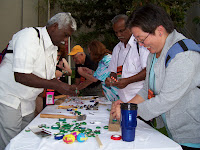 We made musical instruments with wood strips, nails, and bottle caps. Perfect for worship and for waking your loved one in the morning. 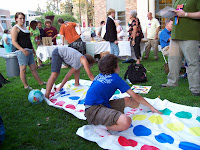 There will be no peace until everyone plays Twister.