Here’s how to understand the Creation Museum:

Here is his first stop on the tour:

In the first room of the Creation Museum tour there’s a display of two paleontologists unearthing a raptor skeleton. One of them, a rather avuncular fellow, explains that he and the other paleontologist are both doing the same work, but that they start off from different premises: He starts off from the Bible and the other fellow (who does not get to comment, naturally) starts off from “man’s reason,” and really, that’s the only difference between them: “different starting points, same facts,” is the mantra for the first portion of the museum. The rhetoricians in the crowd will already see how a card has been palmed here. The Museum is casually trying to establish an equivalence between science and creationism by accrediting them both as legitimate “starting points” for any discussion of biology, geology and cosmology. This would cause any scientist worth his or her salt to have a positively cinematic spit take, because it’s horseshit, but if you don’t know any better (say, if you’ve been fed a line of crap your whole life along the lines of “science is just another religion”) it sounds perfectly reasonable.

And so if you buy that, then the next room, filled with large posters that offer on equal footing the creationist and scientific takes on the creation of the universe and evolution, seems perfectly reasonable, too: Heck, we can both have our theories! They’re both okay. The problem with this is that creationism isn’t a theory, it’s an assertion, to wit: The entire universe was created in six days, the days are 24-hour days, the layout for the creation and for the early history of the planet and humanity is in the first chapter of Genesis and it is exactly right. Everything has to be made to conform to these assertions, which is why creationist attempts at science are generally so damn comical and refutable.

I could post his whole article, but that wouldn't be nice. Go over to John's site and give him a thank you for spending his day touring horseshit so that you don't have to.

If you want to tour something really worthwhile, and you happen to live near my mountain, check out the Gray Fossil Site in Gray, Tennessee (between Johnson City and Kingsport). 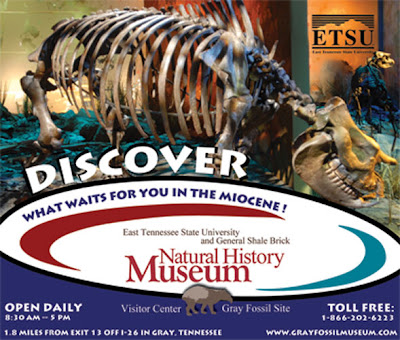 This is the real thing. Science not horseshit.