"If God, as they say, is homophobic, I wouldn't worship that God." 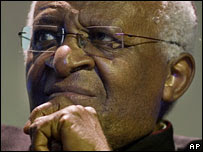 Thanks to Archbishop Desmond Tutu for saying that in a critique of the Anglican church. Here is the article:

In an interview with BBC Radio 4, he said the Archbishop of Canterbury, Dr Rowan Williams, had failed to demonstrate that God is "welcoming".

He also repeated accusations that the Church was "obsessed" with the issue of gay priests.

He said it should rather be focusing on global problems such as Aids.

"God must be weeping looking at some of the atrocities that we commit against one another.
(Read More)