Liberalism is a “Goliath” in the Presbyterian Church (U.S.A.) that has led the denomination down a path to a “faith in which it cannot live faithfully,” said the Rev. Jerry Andrews, co-moderator of the conservative Presbyterian Coalition, an umbrella group for more than a dozen “renewal” organizations in the denomination.

Along these “false paths,” liberals have lost their way and their ability to lead, the suburban Chicago pastor told more than 220 participants meeting here at St. Andrew’s Presbyterian Church for the Coalition’s Gathering XI.

“[Liberalism] has been the Goliath in our life. I think the Goliath has fallen,” he said. 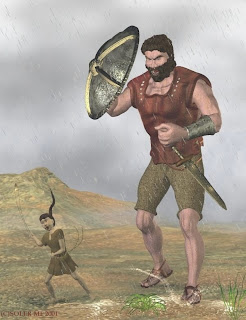 For those of you who didn't know, Goliath was not only a liberal, he was gay.

[Andrews] said the term post-Christian referred to the Assembly’s actions, which he said vacated all previous church teachings on the subject of homosexuality.

This new evidence that Goliath was a liberal post-Christian gay giant has raised some eyebrows at the Society of Biblical Literature. Scholars plan to study the issue in depth at their Fall gathering.