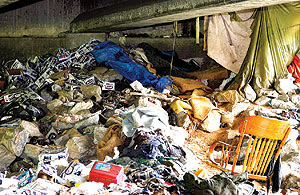 This article in the Elizabethton Star disturbed me.

A guard from Northeast Correctional Center was appalled this week when inmates under his watch exposed a shelter under the northbound bridge on Highway 19-E at East Side while mowing the median between the two bridges, where weeds and grass had grown several feet high. "This is really disgusting. It has been there for two or three years. I have told the city and county both about it, but nothing has been done," he said.


It's one of those cases of where you have to see it to believe it. Underneath the south end span of the bridge, debris is in abundance. There are mattresses, slabs of foam padding, stacks of blankets, bottles and cans, cardboard, piece after piece of clothing, shoes, a rocking chair, ice chests, and a kerosene heater as well as assorted personal belongings. At first glance from the highway, it looked as if someone has dumped their trash, but upon closer inspection, it revealed much more.

What is revealed? This was someone's home. The article goes on:

Among the items near some bedding was a Bible and what appeared to be a journal. Food wrappers and containers were also strewn through the trash. A fresh banana peel indicated someone was there just hours earlier.

The guards and the authorities can be appalled at what is a mess to them. However, this is where someone (or perhaps more than one person) calls home, or used to call home. Now, they are homeless again. I wonder if anyone is concerned about the welfare of those who made a home under that bridge?