We are very excited to have Lama Gursam visit us next Saturday when he tours the Tricities area. Here is his biography and his schedule. 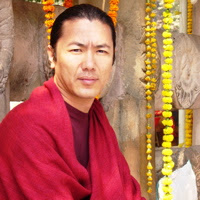 At the age of six, Lama Gursam entered Drikung Kagyu Monastery in Tso Pema, India, where he completed his basic education and studied Buddhist philosophy, practice, ritual and conduct. In 1981 he began his college education at the Central Institute of Higher Tibetan Studies (university) in Sarnath, Varanasi, India. He earned his Bachelor’s degree in 1988 in the Sanskrit, Hindi, Tibetan and English languages and in Buddhist philosophy.

Pursuing graduate study at the university, he was President of the student union, and served two years as a Kagyu committee member. In 1990 he received his Master’s degree in advanced Buddhist philosophy. Upon graduation he also received a special award from His Holiness the Dalai Lama.

After graduation, Lama Gursam was requested by His Holiness Kyabgon Chetsang Rinpoche to come to the Drikung Kagyu Institute in Dehra Dun, India. There he served as a volunteer for 5 years, teaching Tibetan language and Buddhist philosophy and history. He also held the posts of Instructor, Head of Examinations and Assistant Director while serving as Secretary to his Holiness Kyabgon Chetsang Rinpoche, the head of the Drikung kagyu lineage of Tibetan Buddhism. During this time, he accomplished a one-year meditation retreat and received Dzogchen teachings and empowerments from Khenchen Thupten Rinpoche along with various other lamas of the Nyingma lineage.

In 1995, Lama Gursam was sent by His Holiness to the United states, where he taught Buddhist philosophy for 5 years. There he met His Eminence Garchen Rinpoche, whom he considers to be the second Milarepa. Under His Eminence’s guidance, together with the Venerable Traga Rinpoche, in 2002 he completed a traditional three-year retreat in the United States practicing Mahamudra and the Six Yogas of Naropa. After a nationwide teaching tour, he traveled to India, Nepal and the border of Tibet, where he completed a six-month retreat in the cave of Milarepa at Lapchi.

In 2005 Lama Gursam led a group of Western students on pilgrimage to the sacred sites of the Buddha in India. He then accomplished more retreat in northern India, and made his first pilgrimage into Tibet where he had retreat at Lho Lungkar Gon, monastery of Lho Böngtül Tendzin Nyima Rinpoche. He returns to his students in the U.S. for another teaching tour, and is currently planning to guide another group of pilgrims in Jan/Feb. 2008 on pilgrimage in India and Nepal.


If you are in the area, join us! Here is the schedule:

9:30 AM: Gather at the church for coffee and snacks.
10 AM-12 PM: Lama Gursam, a Tibetan Buddist, will talk to us about "Precious Life".
12 -1:30 PM: Lunch Break--Be sure to bring a bag lunch to have on the grounds.
1:30 PM: Mandala presentation for ideas to use on our stones
2 - whenever PM: The making of the stones for the labyrinth

The stones for our church labyrinth will be constructed in the Tom Dixon room and each stone will be a reflection of that church member's life, a dedication to a loved one, a commemoration of a birth or wedding, or whatever that person wants to put on his or her stone. Stones can be added in the future since there will be blank ones that can be used as new members join us. We have lots of artistic talent in our church and I'm sure these members will be glad to help and offer suggestions as to the best way to express what you want on your stone.

Come and enjoy the fellowship as we work together to create a wonderfully unique labyrinth for our church.