Found this in today's Elizabethton Star:

Church puts slogan on shot glasses to publicize new campus
CHARLOTTE, N.C. (AP) -- To get people to attend his new church campus, Robbie McLaughlin is sending his message out to where the people are.
Staffers from Next Level Church of Matthews will go to bars in the Ballantyne area of Charlotte to hand out shot glasses that ask patrons to "give us a shot" and bear the slogan, "Real church for real people."
The idea is to draw people to the church's new Ballantyne campus, which opens next month.
McLaughlin is the pastor, and said he is confident that it will be controversial, but he said the goal is not necessarily to impress people who already go to church. He said it's to impress people who don't.
Founded in 2005, Next Level is an evangelical church that encourages members to dress casually and snack on coffee and doughnuts during services.
McLaughlin said the idea has caught on, and in two years, the church has grown from a handful of members to more than 700.

Comment: You can't even get away from the evangelistas by going to the bar. I am waiting for one of the taverns to strike back and sneak two for one coupons in the church bulletins. It is these types of antics by Christians that make folks not want to be one. 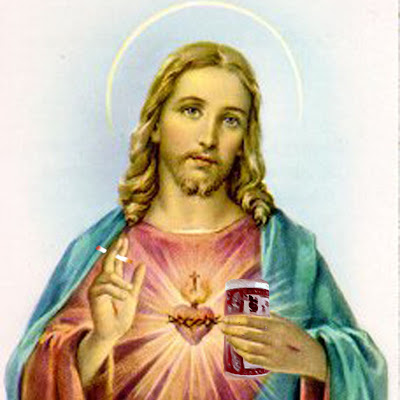 Top Ten Reasons Why Beer Is Better Than Jesus

10. No one will kill you for not drinking beer.
9. Beer doesn’t tell you how to have sex.
8. Beer has never caused a major war.
7. They don’t force beer on minors who can’t think for themselves.
6. When you have beer, you don’t knock on people’s doors trying to give it away.
5. Nobody’s ever been burned at the stake, hanged, or tortured to death over his brand of beer.
4. You don’t have to wait 2,000+ years for a second beer.
3. There are laws saying that beer labels can’t lie to you.
2. You can prove you have a beer.
1. If you have devoted your life to beer, there are groups to help you stop.