Did you know that?

I just discovered that today. We are reading (a translation of) the Qur'an cover to cover this year and for March the assignment is Surahs 3, 4, and 5. I am preaching on the Qur'an this Sunday and I have a preview on Qur'an and Jive. In Surah 3 verse 52, we find Jesus saying:

When Jesus found Unbelief on their part He said: "Who will be My helpers to (the work of) Allah." Said the disciples: "We are Allah's helpers: We believe in Allah, and do thou bear witness that we are Muslims.

Son of a gun. I never learned that in Sunday School.

It is more fun interpreting than being interpreted, isn't it?

I wonder when that will stop? Maybe it will end when we stop fighting for our interpretations, allow ourselves to draw truth from all, and let ambiguity be.

I kind of like thinking of the disciples as Muslims. Maybe the cure to our religious woes is to mix all of our religious stories. Rather than try to separate out the pure tradition and put people in boxes--Jew, Christian, Muslim, Hindu--let everybody be everything. 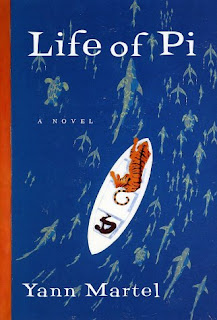 “What is your son doing going to temple?” asked the priest.

“Your son was seen in church crossing himself,” said the imam.

“Your son has gone Muslim,” said the pandit.

Yes, it was all forcefully brought to the attention of my bemused parents. You see, they didn’t know. They didn’t know that I was a practising Hindu, Christian and Muslim.
--Life of Pi

May his tribe increase.